The founder of Non-Violence World peace Buddhist organization and the main Guru of Sangak Dechhenling Monastery Karma Gyan Sagar Rinpochhe is a renowned Buddhist teacher and retreat master. He was born in Makawanpur, The central of Nepal in 1990 B.S, His father name was Karma Tshewang and mother name was marmen dolma. He was burn to a religious family from his earliest youth he was devoted to the three jewels. He spend good part of his early life with Jyatal Sangge Rinpochhe who is renowned as great master of Nyingmapa linage. In 2017 B.S. he completed three year three month traditional retread under the guidance of H.E. Jyatal Sangge Rinpochhe in cave of Tendang Mountain at sikkim. Forther more as same retreat he accomplished once is Jorbanggala Gunba at Tigerhill Darjaling and twice in Daune Mountain at Nawalparasi Lumbini zone. In this way he meditated and retread upon great perfection (Jokpachenpo) for thirteen years. He is also known as a tshethar lama. It the terms tshethar is analyzed etymologically, we find that the element tshe means life and when this is conjoined with thar which means save to give freedom or liberation. He has been released three millions of fishes chickens, goats and other animals from the suffering of certain death. Since 2036 B.S. he has been saving one hundred and twenty five thousand fishes every year. So one of the goal of Rinpochhe is to release animals from suffering though the creative non-violence vegetarian education and advocacy for his incomparable contribution toward world peace the government of Nepal awarded him with -"Sagarmatha Pratisthan Nepal award 2058"

“The past is already gone, the future is not yet here. There's only one moment for you to live, and that is the present moment”
“As you walk and eat and travel, be where you are. Otherwise you will miss most of your life.”
“Better than a thousand hollow words is one word that brings peace.”
“Long is the night to him who is awake; long is a mile to him who is tired; long is life to the foolish who do not know the true law.”

“When the student is ready, the teacher will appear.”
“It is better to conquer yourself than to win a thousand battles. Then the victory is yours. It cannot be taken from you, not by angels or by demons, heaven or hell.”
“NOTHING IS FOREVER EXCEPT CHANGE.”
“If we fail to look after others when they need help, who will look after us?”

“Three things can not hide for long: the Moon, the Sun and the Truth.”
“Doubt everything. Find your own light.”
“There is no path to happiness: happiness is the path.”
“Your purpose in life is to find your purpose and give your whole heart and soul to it”
“If you truly loved yourself, you could never hurt another.”

“However many holy words you read, however many you speak, what good will they do you if you do not act on upon them?”

“The secret of health for both mind and body is not to mourn for the past, nor to worry about the future, but to live the present moment wisely and earnestly.”

“Peace comes from within.  Do not seek it without.” 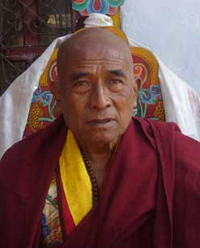 Prem Dorje Bal Lama is a general secretary of Non-violence World Peace Buddhist Organization since 2036 B.S. He was born in chandanpur-3
read more